Tailor-made for fans of musical theater, “Tick, Tick … BOOM!” , Lin-Manuel Miranda’s autobiographical Netflix musical about “Rent” composer Jonathan Larson, is a celebration of the creative process and the pursuit of dreams.

â€œEverything you are about to see is trueâ€¦ except for the parts that Jonathan wrote. “

It’s January 1990 and Larson (Andrew Garfield) is an aspiring songwriter, working in a restaurant to pay the bills. He’s also on the cusp of turning 30 – older than Stephen Sondheim when he wrote his first musical. Older than Paul McCartney when he wrote his last song with John Lennon.

Eight years writing the futuristic rock musical “Suburbia”, a satire set on poisoned land, he feels the pressure to succeed. “I’m the future of musical theater,” he says, but his girlfriend Susan (Alexandra Shipp) wants to leave New York and his best friend Michael (Robin de JesÃºs) has given up, leaving the stage for a job at an agency. advertising. , making “five digits”.

Jonathan struggles to finish his musical in the days leading up to a performance workshop in front of a select audience of Broadway luminaries. He’s broke and pulled from many sides, but confident. “When ‘Suburbia’ is produced,” he says optimistically, “I’ll get paid for my music.”

In his personal life, his friends and theater colleagues die of AIDS. Professionally, he’s distracted, struggling to finish the show, feeling anxious about the passing of time and his failure to break into Broadway.

Larson’s preoccupation with time, finding success, and not being “a waiter with a hobby”, is all the more poignant as he died in 1996, at the age of 36, the day of the first â€œRentâ€ offering. Broadway premiere show.

“Tic, Tic … BOOM!” Is kind of a meta. It’s a musical over another musical, wrapped in a movie musical. He follows Larson through the workshop for â€œSuburbia,â€ the songwriting for the off-Broadway show that gave the film its title, and the experiences that led to the writing of the show that defined it. “Rent” era.

Music takes center stage, with exuberant performances from the song and dance number “No More”, the captivating “Boho Days” and the mighty “Come to Your Senses” and the heart-wrenching “Real Life”, but c tis a musical whose dramatic scenes are not just links between the tunes. Garfield captures not only Larson’s angst, but his passion as well. It’s the story of chasing a dream, and the blend of aspiration, determination and desperation in Garfield’s performance is palpable. Her face as her agent Rosa (Judith Light) tells her, “You keep throwing them against the wall and finally hope something sticks,” sums up the realization that every creative person has to face.

As good as Garfield is, the real stars of “Tick, Tick … BOOM!” are Larson and Lin-Manuel Miranda. The composer’s more obscure songs are given a deserving showcase, and Miranda brings Larson’s story to life with both reverence and joy.

By the way, the film, completed and released before Stephen Sondheim’s death, presents a warm tribute to the legendary composer, who offered his support and grace to Larson when many others did not.

Ron Perlman’s wild new VOD movie “This Game’s Called Murder” is a very dark comedy about consumer culture, romance and murder that feels like a cult movie on hold.

Written and directed by Adam Sherman, the film is a scary, surreal story that doesn’t follow the rules. Perlman is Mr. Wallendorf, designer of luxury shoes for women. Known for his iconic blood red stiletto heels, he is a fashion icon, but behind his fame lie murder, greed and betrayal.

His wife, Mrs Wallendorf (Natasha Henstridge), is as shrewd as she is brutal, as evidenced by a scene where she shoots a bullet in the forehead of a business rival, then offers to dance naked for him as he lies bleeding in dead.

His daughter Jennifer (Vanessa Marano) is an alcoholic social media influencer whose online habits confuse her father. â€œWhy do you insist the whole world see you in your underwear,â€ he asks. â€œMy fans love me,â€ she said.

Their life is, to say the least, complicated. Things get more complex and deadly when Jennifer sabotages her father’s affairs as he tries to keep a happy public face.

Ripe by violence and sex, “This Game’s Called Murder” has a sort of dreamlike logic in its plot. The story jumps from character to character, plot to plot, creating an absurd whole that aims to make a statement about social evils, using violence and very dark humor.

Greed, online influencers, alienation, and consumerism are all ripe for social satire, but director Sherman’s (who also wrote the script) ‘s scattergun approach blurs the messages. The plot twists are often eccentrically entertaining, but in the second half, become boring.

Weird for the sake of being weird won’t get you far, and Sherman stretches the weird stuff so far it feels like it might snap like an over-stretched rubber band.

The visual style of the film is eye-catching, and Perlman is always a welcome presence, but as pleasing as “This Game’s Called Murder” may be in its individual elements, he favors advantage over storytelling. 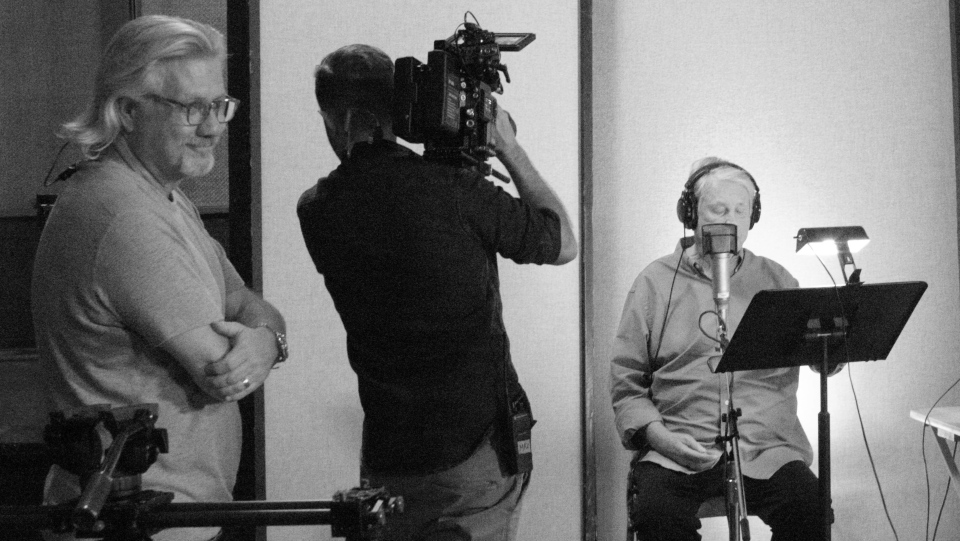 At the start of “Brian Wilson: Long Promised Road”, a new documentary about the legendary Beach Boys frontman, now on VOD, an interviewer asks him to explain how he writes songs. â€œIt starts in my brain,â€ he says. â€œMade his way to the piano and studio speakers. “

Can you explain further?

This exchange sums up what much of the movie looks like. As this is a reluctant subject, it doesn’t reveal much, certainly everything you don’t already know about Wilson’s well-documented life, but the chance to hear his music recontextualized by talking heads like Bruce Springsteen, Elton John, Linda Perry and others is a treat.

Directed by Brent Wilson (no relationship), the backbone of the film is a road trip between Brian and “Rolling Stone” writer Jason Fine. They sail to Beach Boys hotspots like Paradise Cove in Malibu, where the band shot their first album cover, their hometown of Hawthorne, Calif., And the home, perched high above Los Angeles, which housed Wilson, his first wife Marilyn and the infamous sandbox he set up as a creative refuge. The two are longtime friends, but even in the comfort of Fine’s company, Wilson seems fragile, offering short, non-descript answers to Fine’s questions.

More revealing are the comments of Elton John and Springsteen or producer Don Was, who calls Wilson “one of the greatest artists to ever walk the face of the earth, in our time or at any time,” s ‘marveling at the production on’ God Only Knows. â€œFormer Barenaked Ladies frontman Steven Page talks about the pressure Brian must have felt being called a genius from a young age. Nick Jonas says expectations are at the root of disappointment. There the film explores something deeper and offers a third-hand analysis of what it means to be Brian Wilson.

Of course Wilson’s music speaks louder than words and this is where “Brian Wilson: Long Promised Road” excels. Wilson, it is said in the film, used the studio as an instrument himself, and if this film teaches us anything, it’s that all we really need to know about the musician is already there, on the grooves of his records.

It is rare to see a â€œPart IIâ€ on an arthouse film title, but we are there. â€œThe Souvenir Part II,â€ featuring the mother-and-daughter duo of Tilda Swinton and Honor Swinton Byrne, and now playing in theaters, picks up where the story of â€œThe Souvenir’sâ€ from 2019 left off.

In it, film student Julie (Byrne) enters a life-changing relationship with an older, arrogant man named Anthony. Her death from a heroin overdose upsets her.

The new film sees Julie attempting to deal with Anthony’s death by making a graduation film as a “memorial” for her late partner. As the project progresses, it’s evident that Julie, who didn’t know Anthony was addicted to heroin, struggles to make sense of her loss. From the start, his idea is greeted with amazement by his teachers who don’t like the script and his production partner (Jaygann Ayeh) who becomes frustrated with his choice of actors.

“The Souvenir Part II” is a calm and meticulous film about how artists use their personal experience to create art and find a voice. Julie de Swinton Byrne becomes a filmmaker, an artist and a person who creates her own path. It is a beautiful natural performance, delicate but solid, which deeply digs the personal and professional maturity of Julie. It’s a pleasure to see Swinton and Swinton Byrne interact as mother and daughter in the film. There is an authenticity in these scenes that feels like a warm hug.

“The Souvenir Part II” is based, in part, on the experience of director Joanna Hogg, and is dripping with complex ideas and emotions. As Julie heals herself, the film has one haunting eye on her past while the other looks to her future.

The shoot is more about mood than straightforward storytelling. It’s like Hogg has a question from Julie’s classmate at film school, Patrick (Richard Ayoade) running through his head as she shoots the movie. â€œHave you avoided the temptation to be obvious? ” he asks. She did, and the movie is better and harder for her.