After 15 years of writing, pitching, rewriting and relentless perseverance, Elan Milkes is preparing to produce a film that has held her head and her heart hostage these many years. It’s a coming-of-age story set in the 60s and 70s about a troubled boy, his love of baseball, and his relationship with his wise grandfather who helps him in his journey towards inner peace. The movie is called, Find the area. Production starts this spring. In Burgdorf. The only thing that could make Milkes happier is finding three crucial ingredients: a team of high school baseball players, a lighted ball diamond, and an old-fashioned convenience store for a scene or two. Based on his initial response from community members in Burgdorf, success is in the air.

Photos courtesy of Elan Milkes – Photos from the production of “Finding the Zone”.

Milkes, a native of Orange County, Calif., created several award-winning shorts in his early 20s before returning to college for an advanced degree in psychology. “We needed something more stable,” he said, describing his main loves in life – his 28-year-old wife and son. “I put this project on hold to raise a family and help others first. The film industry was too unequal for me. It doesn’t necessarily get you on the right path. I didn’t want that style of life. I wanted to raise my son, be a good husband. So I opted for stability. Over the next 26 years, Milkes taught at-risk youth. But still, he writes. He tweaked. He rewrote. He dreamed. With his adult son and a stable retirement income, it’s time to devote himself fully to his profession.

His goal: to create a great story with artistic value and commercial appeal. His muse: Stan Musial, the baseball legend Hall of Famer who played 22 seasons with the St. Louis Cardinals. “He impressed me. I read everything I could about him. This normal human being with a knack for baseball. He wasn’t your typical sports hero. No bling. entourage. I like that kind of guy. I read everything I could find. I idolized him.” Musial died in January 2013, but before he died Milkes sent him a copy of his script along with a letter explaining his project. “No response at first,” he said, “but six months later a package arrived from Stan the Man Inc. It contained a letter of encouragement from the Musial family as well as a special gift from Stan himself: his signature on the manuscript “I was blown away,” said Milkes.Hopes for a closer relationship, possibly collaborating on the project never came to fruition, but the encouragement did were not in vain.

Although he couldn’t make a Stan the Man movie, he could take inspiration from him. So he did a complete rewrite.

As a setting, Berthoud caught Milkes’s instant attention and affection. “A dream come true,” he said after visiting Dave and Diane Levy’s quaint farmhouse when a family friend introduced them. “All the location elements I was looking for were there – expansive farmland, views of the Rockies, a pond, a warm home.” The Levys introduced him to other locals who graciously offered to help. Triloki Patel, the new owner of Grandpa’s Cafe, offered to use his restaurant to shoot a scene. The Levy’s neighbor Steve Williams offered his treehouse, and Kristin Ramey, owner of Long Shadow Farm with a slew of farm animals, offered her land as the setting. At a lunch hosted by Levy, Milkes met Kathleen Gruman, a local estate agent and member of the board of directors of Burgdorf’s Moon Theatre. “We only met briefly, but his enthusiasm in helping me with this project was incredible.” 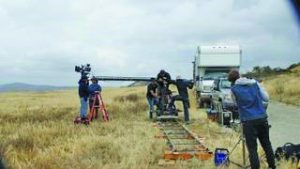 Through word of mouth and social media, Gruman helped Milkes secure a bountiful roster of residents eager to be a part of the film.

Through multiple acts of kindness, Milkes instantly captured the essence of Burgdorf. “Its real beauty is not just the beautiful surroundings. People are the lifeblood that breathes life into the landscape. Everyone smiles, a peaceful existence based on friendship and trust in each other. Berthoud’s spirit is the very essence of this film. Call it serendipity or pure luck, finding Berthoud put me in a zone of gratitude and gratitude. I intuitively knew that Burgdorf was the place.

Filming is expected to begin in early summer. Preparations will begin earlier in April when Milkes and fellow award-winning writer/director/producer Michelle Opitz return.

In addition to the team, the field, and an old-school store, Milkes is always on the lookout for local extras and talent who want to get involved in the baseball and townspeople scenes. Interested persons can contact him directly at [email protected]