Welcome to our new binge reporting format, where instead of tracking binge sessions, we now keep track of the most popular original movies and TV shows Americans streamed over the past week. For those interested in Australian numbers (provided by the streaming search engine JustWatch), please see here. You can read last week’s report here.

The TV Time app (iPhone and Android) helps users organize their streaming plans. The data here is tracked by US app users, and some shows listed are not available in Australia without the use of a suitable VPN.

Netflix’s Sandra Bullock drama The Unforgivable was the top-air movie of the weekend of December 10-12, 2021. Critics shot the movie, but fans seem to be enjoying it, so check it out for yourself.

On Peacock, there’s a Spider-Man mini marathon from the original Sam Raimi / Tobey Maguire trilogy, occupying positions 6-8 on this week’s chart. Disney + ‘s “Black Widow” is also back in the top 10, in 10th place.

Leaving the top 10 were “Zoey’s Extraordinary Christmas”, “Elf”, “Jungle Cruise”, “A Castle for Christmas” and “The Power of the Dog”.

Click on the image below to view a larger version.

No more original streaming shows, HBO’s “Sex and the City” sequel series “And Just Like That …” started out well in 7th place, followed by Hulu’s “Pen15” and “SEAL Team” ( Paramount +) in 10th.

Click on the image below to view a larger version. 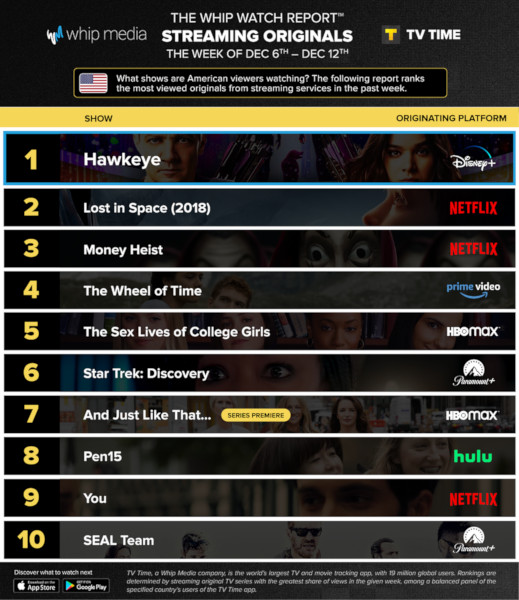